The Central Board holds the responsibility of conducting board examinations every year. The Central Board of Secondary Education is a Board of Education established in 3rd of November 1962 it’s head office situated in Preet Vihar Delhi. Almost 10 lakh Student Appeared In The Exam. According to the CBSE BOARD 1.01 % increase of total students in CBSE BOARD 2015 as compared to previous year. In CBSE BOARD students appeared in three stream the streams were science arts and commerce and most of the students either opted arts or commerce.

CBSE 12th Results 2015 are declared now. This year girls proved again the ability and Scored highest marks in CBSE 12th Board. The result of CBSE 12TH BOARD 2015 has been declared on 25nd May 2015 at 12 pm. Since the official websites CBSE.NIC.IN and CBSERESULTS.NIC.IN Sites Crashed at the time of Result Declaration. So Student faced little bit problem in viewing their results, but later on problem was solved by CBSE BOARD. 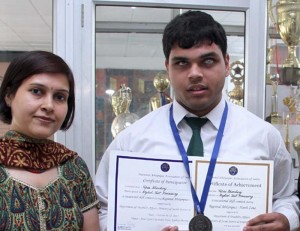 Tapas Bhardwaj a student who has no vision since birth took the exam with the help of a scribe and Scored 457 marks.

The candidates can check their CBSE 12th class merit list or CBSE 12th CLASS RESULT On cbse.nic.in , cbseresults.nic.in . Students can also get the CBSE 12th result on IndiaResults.com Portal.

Keep Visiting Results360 to get all information for Boards and Competitive exams.

Always Give your valuable suggestions in the Comment Section.

Follow Him @
Praveen Jain
Praveen is a Dynamic Writer on educational topics with an experience of more than 5 years. His Blogging for education news, science & technology niche is Remarkable. He is a G.K expert, Book reader & a sports fanatic by nature.
Follow Him @
Latest posts by Praveen Jain (see all)
Previous: Bihar Board Intermediate 12th Commerce Results 2015 Announced
Next: Maharashtra Board HSC/ 12th Results 2015 All Regions Announced